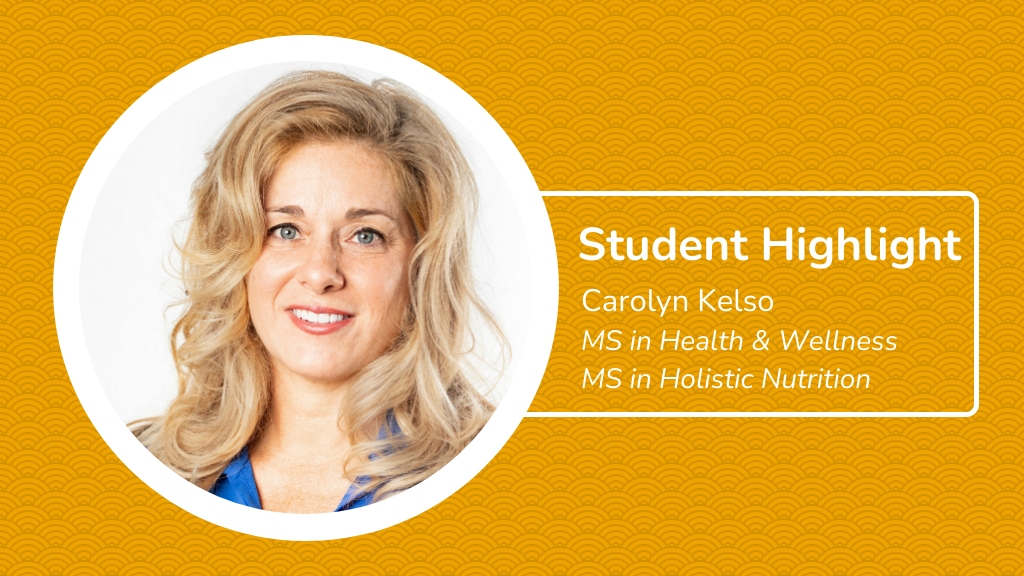 Carolyn Kelso is a student in the MS in Holistic Nutrition program and a graduate of the MS in Health and Wellness program at ACHS. She is the owner of Betty Carry and also plans on starting a health and wellness coaching business after she graduates.

Serving in the United States Marine Corps for ten years, Carolyn injured her back while she was on active duty. Previously she had led a very athletic lifestyle and even ran marathons. Without the ability to exercise while her back healed, she realized that she would need to change some of her lifestyle habits in order to stay healthy and not gain extra weight. “I didn’t have the physical structure to work out and to actually take that weight back off. So my goal was to prevent it from even coming on,” she says.

Carolyn got some books on nutrition and started researching different diets. “I came to find out there were a zillion different diets out there,” she says. She wanted to learn more about nutrition from a reliable source so she went to the Department of Veteran Affairs and asked to be accepted into their vocational rehabilitation program.

Carolyn was approved for the program and ended up getting her Bachelor’s in nutrition science at Kaplan University. “Through that whole process of completing my Bachelor’s in nutrition, I never thought I would learn so much more about the whole environment around nutrition,” she says. “That’s how it all got started. I had a personal injury that developed into a personal need. As I looked into it for the need, I found that I was actually interested in it. And that sparked a lifelong passion from there.”

“In the midst of getting my nutrition degree, I learned about the holistic side of nutrition,” Carolyn says. In the resources provided by her nutrition degree, Carolyn found out about the National Association of Nutrition Professionals (NANP). She signed up for a student membership and went to one of their conferences.

“That’s where I met some of the staff from ACHS who had a booth there,” she says. “I had just recently finished my Bachelor’s so they talked to me about going on with a Master’s at their school. And honestly, I kind of got excited about it!” Soon after, she enrolled at ACHS to complete an MS in Holistic Nutrition.

Somewhere along the way Carolyn switched to an MS in Health and Wellness instead, which she completed in the summer of 2020. Then, she learned that she only had 4 classes left to also get an MS in Holistic Nutrition! “Using my Post 9/11 GI Bill, I thought I would knock out those 4 classes and get it done. I’m excited about that,” she says.

“In the midst of my degree, I found out that I really like coaching,” Carolyn says. She plans on finishing her Master’s degree at ACHS and then going on to get a coaching certification before she opens a holistic health coaching business. “I want to have the credentials to move forward and provide a solid product and coaching to the public,” she says.

Note: If you would like to learn more about how to use military benefits with school, such as the Post 9/11 GI Bill that Carolyn will use, please watch our free Guide To Military Benefits here, or email us at military@achs.edu.

“That really gave me some pause and I thought wow, wouldn’t that be neat if I could put that under a public health and wellness approach,” she says. She says that no matter your position on gun control, the reality is that many people do own guns and it is important to teach people proper firearm safety handling skills.

Inspired by her class assignment, Carolyn opened her own firearm training business: Betty Carry. “I just started this past august and I’m super excited about it,” she says.

Advice for Students and Entrepreneurs

If you dream of opening a business but haven’t made the leap yet, Carolyn has some advice for you. “I think having a degree is step number one,” she says. Once you have a degree, it is important to do your research and listen to what clients want.

“If you wake up with the prickles on the back of your neck and you wake up with an idea that’s so profound, don’t let that big fire burn down to little tiny embers. Write it down and capture the idea,” she says.

It can be hard to work on a degree, especially when you are at home with children. Carolyn’s advice is to take a deep breath to calm down, and then realize that it’s okay if you are not doing as much for others as you usually would.

“Tell yourself it’s okay to not work at 100% for this short time. Because you’re going to be working 100% for you,” she says. You have to learn when to do more for you and less for others. It doesn’t mean you’re not doing for others, it just means you’re doing less. You have to build that balance. Every time I have that stress or doubt, that only happens when I think I’m supposed to do a lot for other people and not paying attention to my own stuff. “

Carolyn says that the stress management course at ACHS really taught her a lot about the importance of intentionality: “You need to be intentional in your life with your choices and your responsibilities, and your successes and your failures. Be intentional about recognizing and processing them and seeing how you could have done things differently, or even just accept things and just move on.”

How will you be intentional about your goals in 2021? Let us know in the comments.

from ACHS Holistic Health and Wellness Blog https://info.achs.edu/blog/student-highlight-carolyn-kelso
via IFTTT